Home  News  Company News  What are the methods of rolling and expanding ring forgings?

What are the methods of rolling and expanding ring forgings?

As a professional flange supplier, let’s talk about the rolling process of ring forgings today.

The rolling process of ring forgings can be classified according to the following methods:

1. According to the different compression deformation directions of the ring during the rolling process, it can be divided into radial rolling and radial and axial rolling, as shown in the figure.

(1)Radial rolling. During the rolling process, the ring wall is compressed radially and the metal extends tangentially. Even if the axial direction is not limited by the roll, the width of the ring wall is still very small. The radial rolling process is mainly suitable for rectangular cross-section, groove-shaped cross-section, and ten-shaped cross-section rings. The equipment used in this process is simple. Because the metal deformation has the characteristics of surface deformation, there is a concave on the end surface of the ring forging The pit appears. 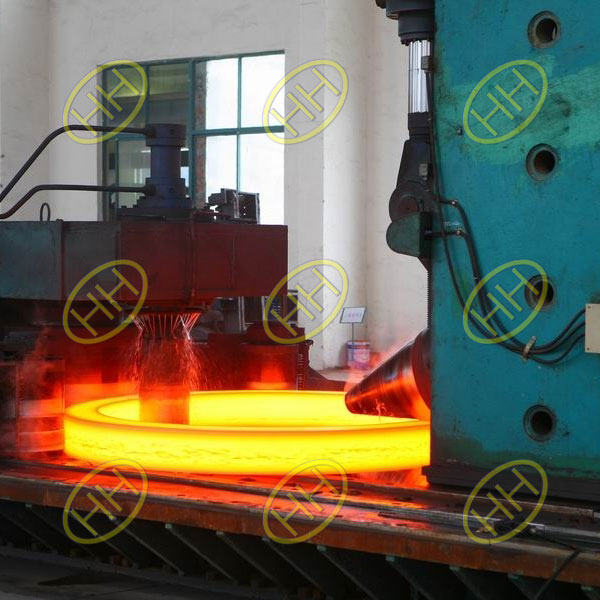 (2)Radial and axial rolling. Radial is a ring rolling process that adds end-face rolls to produce axial deformation on the basis of radial rolling. It uses a pair of radial rollers and a pair of axial rollers to roll the wall thickness and ring height respectively. The rolled ring has a straight end surface, and the number of mold changes is small, so the mold is greatly saved. This process is mainly suitable for ring forgings with large wall thickness or complicated planting surface.

2. According to the different types of grooves on the reamer, the rolling process can be divided into two types: open rolling and closed rolling.

(1) Open type rolling. Open roll spreading adopts flat rolls, which are mainly used for expanding holes of large rectangular section. The advantage is that the same pair of rollers can be used to expand rings of different sizes. In order to avoid widening caused by uneven deformation, two pairs of freely rotating conical forgings can be added to the reamer, so that the blank can obtain accurate dimensions in height. This situation can also be called semi-open rolling.

(2) Closed rolling. The closed-type rolling roller groove is designed according to the requirements of the shape of the cross section of the workpiece, and can be used for the expansion of the ring of various cross sections.

3. According to the different rolling equipment used, it can be divided into vertical rolling and horizontal rolling.

Share:
Prev： Heat treatment of large flanges
Next： What is the difference between hot rolling and cold rolling?