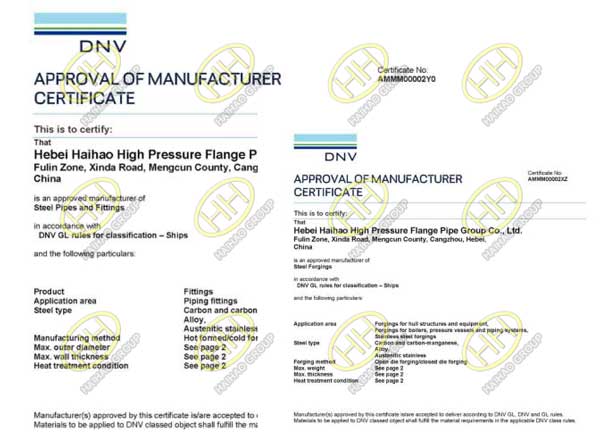 Det Norske Veritas is a world-renowned ship classification inspection and one of the international authoritative certification bodies. It has obtained credit approval from more than 80 countries in the world. The marine or offshore platform equipment certified by DNV must be strictly inspected and audited by professional surveyors. It is a symbol of safety and quality. Because of this, DNV is strict in the standardization of its marine standards and laboratory inspection qualifications. Hebei Haihao Group has continuously increased investment in software and hardware to enhance the company’s comprehensive strength and market competitiveness. It has successively added pipe fittings and flange production lines and inspection equipment, trained a large number of professional and technical personnel, expanded the industrial scale, and improved product quality control; passed ISO quality system certification (ISO9001, ISO14001, OHSAS18001),which effectively ensures the superiority and reliability of the product quality of Hebei haihao group.

After sufficient certification preparations, Hebei Haihao Group formally submitted the DNV certification application to Det Norske Veritas in March 2021, and successfully passed the material declaration and on-site audit. The successful passing of the DNV certification not only provides an effective guarantee for the development of Hebei Haihao Group in the marine pipeline accessories industry, but also improves the competitiveness and the brand awareness,also further expands the influence in the international market.

Share:
Prev： Large-size flanges made of S275JR material
Next： Haihao Group has produced a batch of API 6A standard flanges